Aria and Character Development I'm in a bit of an anime rut.  None of the new series have fully captured my attention (though Minami-ke is coming close).  However, my stock of patience is not up to paint more little metal bits and I haven't made it to the store to purchase Portal the Orange Box.  So I've gone back through the collection and am re-watching the better parts of Aria, and I've even managed to find a fansub of the recent OVA, Arietta.

One of the things I've both loved and hated about animation is trying to describe it in terms familiar to American TV viewers.  I love it because it's a constant reminder of what I like about anime in the first place: it's different.  While a lot of anime seems to build off of other anime in terms of genres and conventions, it's still not to difficult to find something unusual yet still fascinating.  I hate it, of course, because I then have difficulty explaining to anyone outside that little circle exactly what it is I'm watching.

Aria is especially difficult to describe.  It's science-fiction, although the science-fiction is merely detail, and if you're looking for a science-fiction show, this almost certainly isn't what you expected.  It's got its fair share of lighthearted comedy.  It's got some fantasy hidden here and there.  Above all, it's a slice of life story (if you can call it a story).  It's not what I thought I would enjoy.  It's got no real plot, although the episodes are sequential and often build off of one another; it's essentially 40 filler episodes.  It's got no real action;  almost all the drama is of the relationship kind.  Aria is a story of the day to day life of three young women who are apprentice tour guides in a rebuilt city of Venice on a terraformed Mars that's now 90% water, and what the series has is character development, often low key, but still character development.

One of my pet peeves about anime and TV in general is character development.  I like to see characters and relationships progress over time.  Be it in relationships or combat, the characters must learn and experience and grow to be fully human.  A lot of anime, including some classics, loses this key point.  The cast of Ranma 1/2 will always be stuck in the same complicated web of relationships.  It's somewhat futile to watch them, as we're back to the same relationship status quo as we were at the beginning of the series.  Sgt. Sousuke Sagara will always be a military blockhead cluelessly circling Kaname.  Tenchi Masaki is eternally stuck between his harem of suitors.

The other thing Aria has going for it is that the world of Aqua and the city of Neo-Venezia are fully fleshed out.  In part, it's because it's a tranquil setting done at a slow pace, and the animators can afford to use a still background for most of the image.  But still, the animators have found the time to include unique locations in just about every episode, and the seasonal effects in some of the episodes are well done (though there are about two fall episodes in the 40 total).  With the extra detail added to Aria the OVA: Arietta, it is an absolute delight to watch.  There's enough color to draw the eye in general terms and enough detail that it's impossible to take in the detail in each shot. 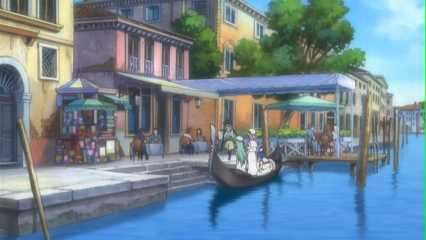 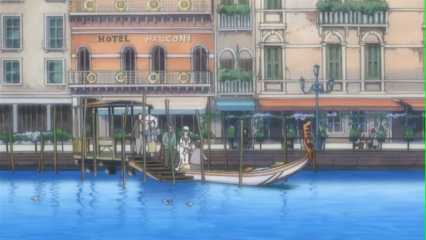 One of the things that always got me about playing a computer game, especially some of the more recent ones, is seeing the same environments reused over and over.  It's another abandoned warehouse with stacks of boxes and barrels.  It's another wrecked castle.  It's another power station with mysterious tubes of lava.  What was worse was pencil and paper RPG GMs that insisted on reusing the exact same tropes over and over again; with a pencil and paper RPG, the art budget is limitless.  Animation has a fixed budget, and I know certain studios have a habit of overspending, but some animation studios frequently miss opportunities to make their worlds come alive.

Further thoughts about character development below the break.  Some spoilers about character backstory, if you can consider anything in this series to be important enough to be kept secret.
more...

1 "In the manga, it's hinted that he's an evolved species, and he's somewhat intelligent.  It's my suspicion that there are also some pygmy hippo genes in there, as well."

I almost never use 'lol', but here it's appropriate, because I really did.  He was rather chubby.  Another webpage wondered how the girls carry him around so easily, though if they've somehow retained human strength despite Martian gravity, that could do it... but I'm probably applying too much science.

I am glad to hear that there's evidence, somewhere, of there being something to him.  I knew the SF aspects were pretty shallow in this "Maria-sama without the tension" show, but I was frustrated at watching no hint as to whether he was *really* a linguistic and tool-using creature or just comic relief.  I know, "real" is pretty problematic anyway, but I guess a measure would be "his human-like traits could affect the plot, if there ever was a plot."  A hint of "yes, he really is a genetically engineered freakazoid" makes me feel better.

2 It's actually in the Aqua manga, the precursor (or prequel, not sure which) to Aria, that they specifically refer to President Aria as a "Mars Cat", and state that he's as intelligent as a human.

I can accept a sci-fi universe with artificial gravity (spacecraft, hoverbikes, flying islands, etc.) as long as they don't throw some hokey explanation as to why.  In Aria, we know that it is the "Salamanders" that regulate the planets atmosphere from the floating islands, and because we don't look too closely at it, it doesn't really register as anything more than boilerplate sci-fi background and doesn't impact the realism of the setting.  But the series states that a second profession, the "Gnomes" that regulate the gravity of Mars / Aqua, and we get a brief look in the anime at the workings of that technology, and it's so ludicrous that even though it's a throw away detail on screen for under a minute, it significantly ruined the realism of the setting.

Other than the tech, I've been very impressed with the realism of the setting.  I went and spent some time looking at pictures of Venice, and the detail work that went in to the portrayal of some of the buildings and areas in the series is quite impressive.  The animators seem to have Saint Mark's Square down perfectly, and in the Arietta OVA credits there's a bit thanking "La Procuratoria della Basilica di San Marco".

3 From what I've gathered, the Aqua manga is what we know as Aria, not a prequel or anything like that.  The series changed from one magazine to another, and the name changed at that time, too.

Everything I've found about it seems to indicate that (talking in anime terms, and I'm making up episode numbers here) ep03 was in Magazine #1, and ep04 was in Magazine #2.  Since each episode is self-contained, it could easily look like a prequel thing...

Of course, I could also be incredibly wrong.  It's not like there's tons of data about it out there.

4 @Wonderduck: I'm really not sure what you're trying to say, but the fact is that ARIA is pretty much the relaunch of AQUA when it changed publishers.  They do connect seamlessly (the two total volumes of AQUA cover Akari's arrival on Aqua in spring up to the end of summer, and ARIA v.1 picks up the story at the beginning of autumn of the same year), so if you are reading the manga, it would be best to start with all of AQUA first.

I can only presume that the ARIA name is better known because the story has been running under that name longer (ARIA will be wrapping up with the 12th volume very soon).

Dan at Protein Wisdom provokes a blog firestorm by using an offensive slang term to highlight the complete lack of real world perspective of many on the left.  Shamus Young, artist behind the wildly awesome DM of the Rings comic, hasn't gone through a dozen strips on his new comic, Chainmail Bikini, before starting a riot in his audience (details here).  I haven't dared to try the link, but regular Ace of Spades commenter Zombietime has covered (Warning!  Very Definitely Not Safe For Work!) an "Alternative Lifestyles" fair in San Fransisco that seems likely to provoke the equally offensive Fred Phelps crowd into their own peculiar brand of offensiveness.  Political commentators on all sides have gone out of their way to be as rude and boorish as possible towards the other side of the politico-cultural spectrum.

My observation has been that the advent of modern technology has led modern culture in America to be increasingly fractured as we have much less in common with our neighbors and our fellow Americans than in the past, and that separation is increasing as time and culture pass.  This is in many ways both a positive and negative development.

I believe that part of the reason behind the explosion of offensive behavior is that increasingly almost everyone feels like an outcast from American culture.  In part, it's an expression of our snobbishness;  "we're not like the others, the common, the strange, the rich, the poor, the conservative, the liberal.  We're better than the others.  Our way is right.  If only they could see that we're right, they'd agree with us, but they're stupid and evil.  We don't care what they think."

It's behind the offensive costumes at Otakon.  All otaku (anime geeks) are definitely perceived as weird by the rest of society.  I watch the looks cosplaying con goers get from normal passers by.  Seeing someone running around downtown Baltimore in weird clothes and blue hair carrying a six foot wooden and PVC sword is definitely strange.   And if they are going to look at you strange anyways, whats the difference between that and wearing a Nazi armband?  Nothing, if you're one of those morons that knows little of history.  You and I know the difference, but your average rebellious high schooler may say, "The powers that be don't like me.  The powers that be don't like Nazis.  Therefore, to rebel against the powers that be, I'll side with the Nazis."  And in doing so, they're more ostracized and pushed towards other things that are ostracized.

It's also aggravated by the fact that the modern cult of victimhood has made all victims equal, and therefore all victimizers equal.  "Sure, Hitler and Stalin were bad.  But so was Columbus.  Therefore people that celebrate Columbus Day are as bad as Nazis, and I don't care if I offend them.  Also, they offend me just like Nazis do."

To sum up, since we're going to offend someone anyways, we don't worry about how offensive our speech or behavior is.  Since we view everyone else as offensive, we don't care if we offend them.